Making advances in colloids and polymer films, since 1995!

Two PhD students from the KeddieLab each won a runner-up award of the Alexei Likhtman Poster Prize at the 28th Biennial  Meeting of the Institute of Physics (IOP) Polymer Physics Group held in Swansea from September 13th to 15th.

Malin Schulz won a prize for her poster on stratification in colloidal films, in which she presented experiments using atomic force microscopy in comparison to Langevin dynamics simulations. She also reviewed the literature to compare experimental results to the expectations of theory. The research will help others who want to make layered films for applications as adhesives, inks, and coatings. The work was conducted in collaboration with Richard Sear, Andrea Fortini, David Makepeace and Alexey Markov.

Phil Richardson won a prize for his poster on studies of the crystallization of polychloroprene colloidal films. He found a sharp increase in the elastic modulus and extensibility when films were coalesced and then re-crystallized. His research is funded by Synthomer. 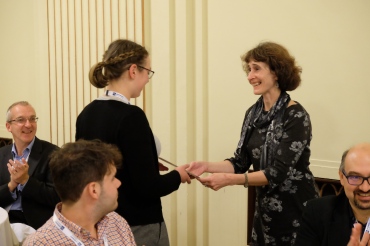 The Poster Prize was established in memory of Prof Alexei Likhtman of the University of Reading, who died on October 11th 2015 following a fall while hiking in Maryland, USA.  Alexei was a brilliant scientist who made profound contributions to theoretical polymer physics.

The Prizes were presented by Alexei’s widow, Katrina Likhtman, at the conference dinner on the evening of September 14th.